History of Riepe College House at the University of Pennsylvania

The various halls that comprise the easternmost section of Penn’s historic Quadrangle, which spans Spruce Street in West Philadelphia from 36th to 38th streets, have collectively held different names over the years:  Community House, Spruce House and Riepe College House -- its current name.

According to George E. Thomas, author of University of Pennsylvania: The Campus Guide, the historic Quad “formed the centerpiece of Provost Charles Harrison’s building program,” and was designed by the architectural firm of Walter Cope and John Stewardson.  “Under Harrison,” he writes, “Penn’s buildings would be based on the English Gothic of the sort that characterized the colleges at Oxford and Cambridge so that all who saw the campus would know of its allegiances as well as its standing.”  Construction essentially began on the westernmost buildings in the late 1800’s (today called Fisher Hassenfeld College House) and slowly moved eastward over time.

Thomas writes, “In 1908 as [Provost Harrison] neared the end of his years of university leadership, his wife was able to give him the “Birthday House” as a surprise present.  Two years later, Provosts’ Tower was given to celebrate his last year as provost.”  While the original architects had since passed away, the firm of Stewardson and Page carried on.  By 1928, the portals of what is sometimes called the “Baby Quad” were built. The entire structure was festooned with bosses (sometimes mistakenly called gargoyles), and around Mask and Wig these include the caricatures of “owlish faculty members” and “donkey-eared undergraduates.”

The Riepe section of the Quad, according to Professor David Brownlee of Art History, “replicated the brick and limestone Tudor Revival architecture adopted by Cope and Stewardson for the first phase of the Quad in the 1890s.”  The halls Thomas Penn and Cleemann were completed in 1912-14 with others completed in 1926-29.  Due to the onset of the Great Depression, construction was stopped until 1954.

In essence, the Quad provided spectacular housing opportunities for the men of Penn for decades, with working fireplaces and maid service in some areas.  The opportunity to actually live there was not extended to women until the early 1970s, though women students had been allowed to visit under tight restrictions.

For many years, well into the 1990’s, both sections of these eastern halls were simultaneously called Community and Spruce but as separate entities.  At that time, there were a total of four “houses” in the Quad.  With the massive Quad renovation that began around 2000, under the direction of Prof. Brownlee, the Houses were condensed to three, based on the natural configuration of the overall complex.  Community and Spruce were reconfigured into one House called Spruce, and that name held until 2004-5.

In 2004, alumni James and Gail Petty Riepe of Baltimore made a $10 million pledge to rename the House and support programming. The Riepes were entirely dedicated to the enrichment of student life at Penn and championed the College House system with palpable enthusiasm.  At the time, Mr. Riepe was chairman of Penn’s Board of Trustees and Gail Petty Riepe was a member of the Board of Overseers for the School of Veterinary Medicine.  Mr. Riepe, W’65, and Ms. Riepe, CW’68, proudly sent three generations of their family to live in the Quad while enrolled at Penn. The official dedication of the House as Riepe was held in March of 2005, to great fanfare.

Riepe has always been a House distinguished by its great faculty presence and high degree of interaction among faculty, staff and students. From the highly regarded Mentors Program, to the legendary barbeques and rich culinary life, Riepe is a House in which generations of first year students have flourished and will continue to do so. 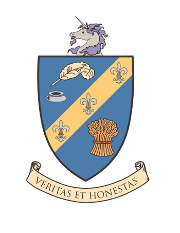